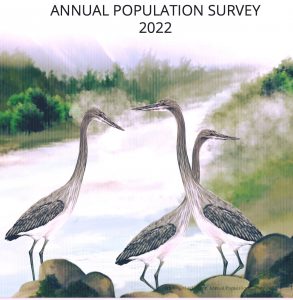 As of 2022, Bhutan’s White-bellied Heron (WBH) tally stands at 23. This was revealed by the annual population census conducted  from 16 – 20 March 2022 by Royal Society for Protection of Nature (RSPN) with Department of Forests and Park Services (DoFPS).
Some 95 surveyors from the DoFPS, Local Conservation Support Group members, and staff of RSPN counted the birds. The counts were conducted in major river basins in Bhutan that includes the current and potential WBH sites categorized into zones. The data was gathered using Epicollect5 app that includes information of the observer, GPS coordinates of the sites, date, time, count, activity and recording major threats to the bird and habitats observed.
During the survey, a total of 24 WBH individuals were recorded. From this, 22 individuals were observed in the wild including one dead carcass of WBH found, and two individuals for the total count are from the WBH conservation center. However, the dead carcass count was dropped for the 2022 annual population statistics of the WBH confirming only 23 WBH is present as of now in Bhutan. Other bird species and wild animals sighted during the survey were also enumerated to understand the species composition in the WBH landscape. A total of 224 bird species and 20 other wild animals were recorded.
WBH is a critically endangered species of bird that is at high risk of getting extinct with only fewer than 60 individuals left in the world. Their distribution is restricted to only a few Southeast Asian countries that include Bhutan, Northeast India, and Myanmar. Within its range, the distribution is further isolated to a few undisturbed and healthy freshwater riverine ecosystems.
In Bhutan,WBH presence was known since the mid 1970s, although the first breeding record was only confirmed in 2003 with the discovery of an active nest. The specialized habitat preference and ecological niche isolate itself to a few major river basins in Bhutan. Today, a major population is concentrated in two river basins of Punatsangchhu and Mangdechhu with occasional sightings from other rivers in the country. All the currently known breeding population is also restricted to these two river basins.
The Royal Society for Protection of Nature (RSPN) has been conducting an annual population census for WBH since 2003 and on the basis of data gathered, the conservation approaches in saving the species are implemented. Today, the conservation approaches in saving WBH include implementation of landscape level projects through the means of ecosystem restoration and community sustainable livelihood creation to harmonize the threats for the species.
Read the full report here https://www.rspnbhutan.org/…/WBH-Annual-Population…
Source: RSPN