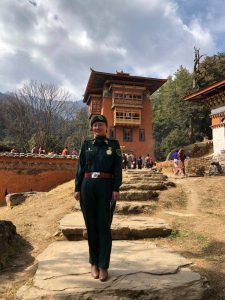 International Ranger Awards were being conferred today, and a lady ranger from Bhutan had a special mention. A great feat! In the first of its kind, the prestigious award for the rangers, coordinated by IUCN WCPA, received over 130 nominations from 43 countries including Bhutan. Ten rangers and ranger teams were conferred with the International Ranger Award and 19 others as highly recommended. It’s a pride for Bhutanese rangers to have our own Norbu Yangdon, being listed amongst the highly recommended rangers in this intense competition.
Norbu bagged this special recognition based on her dedicated and selfless leadership in conservation and for her personal commitment towards protecting and conserving the highly fragile and threatened biodiversity in the far east Sakteng Wildlife Sanctuary.“I feel honored and deeply humbled for being recognized as one of the highly recommended rangers.” Norbu expressed. “It’s a great source of motivation for me to work harder in safeguarding our sacred natural resources, my personal commitment towards serving tsa-wa sum. I am very grateful to my chief for sending the nomination. “
International Rangers Award first of its kind was developed through a collaboration between the IUCN WCPA, the International Ranger Federation, Global Wildlife Conservation, and Conservation Allies to highlight and felicitate the extraordinary work that rangers do in protected and conserved areas worldwide.
–Nature Conservation Division