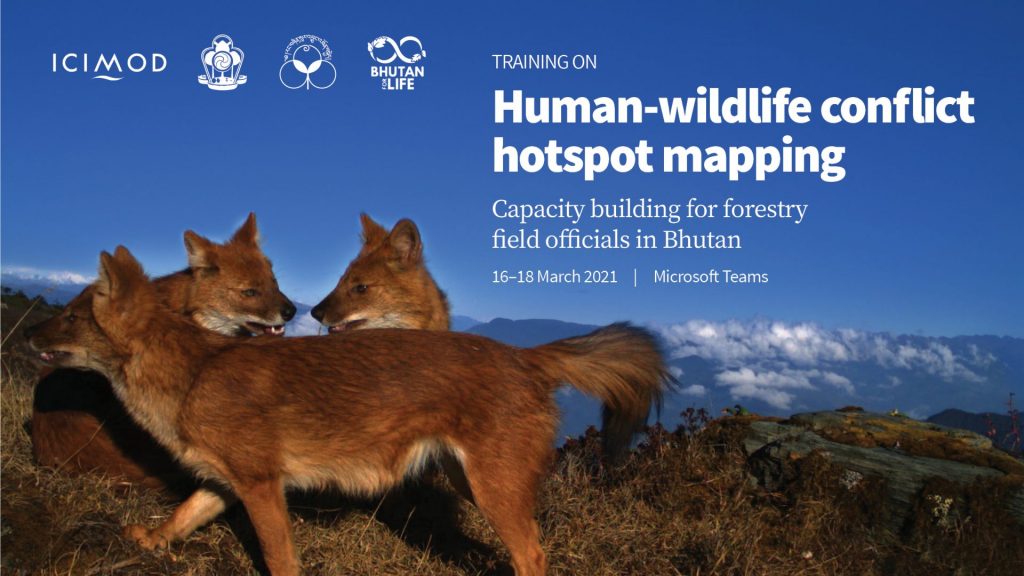 16-18th March: Human-wildlife conflict (HWC) is a major cross-cutting issue that especially affects the rural poor in Bhutan. While HWC is recognized as an issue, the current scenario is that we are not able to understand the geographical pattern of its spread and severity of the incidences. In order to identify the areas in the country that are at high risk of HWC, understand the mechanisms of interaction, analyse possible drivers, and prioritize conservation efforts, three days of virtual training on Human-wildlife conflict hotspot mapping was coordinated by the Nature Conservation Division, Department of Forests and Park Services (DoFPS), with technical support and resource persons from the International Centre for Integrated Mountain Development (ICIMOD) through Kangchenjunga Landscape Conservation Development Initiative (KLCDI). The training was attended by 60 participants from protected areas, divisional forest offices, and research institutes under the DoFPS, and was supported by Bhutan for Life project.

The opening of the training was graced by Mr. Lobzang Dorji, Director of the DoFPS from the Bhutan side wherein he expressed the gratitude of the Royal Government of Bhutan to ICIMOD for their continued support. To the training participants, he urged them to grasp the best from the learning though virtually and emphasized the need for field offices to identify HWC hotspot areas in their respective jurisdictions and implement practicable and innovative solutions to mitigate the issue. Representing ICIMOD, Dr. Basanta Shrestha, the Director of Strategic Cooperation also graced the training with an opening remark wherein he shared about the regional programmes that ICIMOD coordinate, emphasizing the transboundary initiatives that they lead to resolving common challenges, one of which is Human-wildlife conflict. “Considering the expertise and experiences that ICIMOD has, we will also provide the necessary support to you.” Dr. Basanta remarked.

During the three days of training, the participants were taught how to use the geospatial data in identifying hotspots in the ArcGIS, and in the predictive mapping of Human-wildlife conflict using Maxent tools. A case study on HWC hotspot mapping conducted for the Kangchenjunga landscape, to which Bhutan is part, which was published in a peer-reviewed journal was also presented to the participants by the resource person, Ms. Prashanti Sharma.

The training participants expressed their satisfaction with the lessons learnt during the three days session and agreed on the time frame for geospatial modelling of the HWC hotspot in Bhutan, which is expected to be completed by 25th April 2021. Once mapped, the field offices, in collaboration with relevant stakeholders, will propose practicable measures to address the prevailing HWC in the locality.

During the closing session, Dr. Nakul Chettri from ICIMOD presented different perspectives of HWC that includes, the context of HWC, science-based knowledge, and field-based HWC management aspects, stating that “HWC is a complex global issue, and transcends international boundaries.” Reiterating ICIMODs support to Bhutan in this issue, he shared that ICIMOD is leading in the formation of a regional task force, that would look for doable actions against common issues such as the HWC. The Chief of Nature Conservation Division, Mr. Sonam Wangdi, in his closing remarks, expressed his appreciation to the participants for taking the training very seriously and showing enthusiasm and commitment towards achieving the post-training requirements, i.e., mapping of HWC hotspot at the national level. He also expressed his thanks to the resource person. Ms. Prashanti Sharma, and the entire support team from ICIMOD.